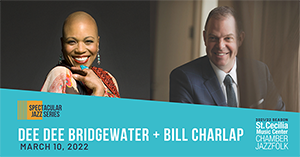 Two Grammy Winners Share the Stage
Over the course of a multifaceted career spanning four decades, Grammy and Tony Award-winning jazz giant Dee Dee Bridgewater has ascended to the upper echelon of vocalists, putting her unique spin on standards, as well as taking intrepid leaps of faith in re-envisioning jazz classics. Ever the fearless voyager, explorer, pioneer and keep of tradition, the three-time Grammy winner won the Grammy for Best Jazz Vocal Album in 2011.

One of the world’s premier jazz pianists, Bill Charlap has performed and recorded with many leading artists of our time, ranging from jazz master Phil Woods and Wynton Marsalis to singers Tony Bennett and Barbra Streisand. In 2016 Charlap won the Grammy for Best Traditional Pop Vocal Album. Since 1997, he has led the Bill Charlap Trio, now recognized as one of the leading groups in jazz.

“Dee Dee Bridgewater has the technique and musicality that beats most performers of her generation.” The Guardian (UK)

“Charlap approaches a song the way a lover approaches his beloved…when he sits down to play, the result is an embrace, an act of possession. The tune rises, falls, disappears and resurfaces in a new form as Charlap ranges over the keyboard with nimble, crisply swinging lines, subtly layered textures, dense chords and spiky interjections.” – TIME Magazine