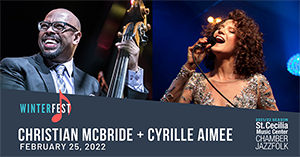 Cyrille Aimée
The acclaimed Grammy-nominated vocalist ventured from singing on street corners in Europe to dazzling audiences at the world’s most prestigious jazz festivals; from sneaking out to sing in gypsy encampments in her native France to acting on Broadway; from braving the notoriously tough audiences at New York’s Apollo Theatre to being called a “rising star in the galaxy of jazz singers” by The New York Times.