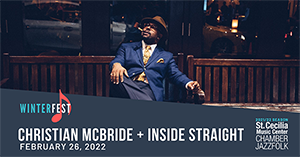 Inside Straight
Inside Straight is an acoustic quintet formed by McBride in 2009.
Kind of Brown, their debut studio album, was released in 2009. Will Lyman of PopMatters wrote “This music is unself-consciously traditional: it’s fun; it swings its ass off. It’s not experimental, but it gives superb voice to several brilliant players and one new discovery. And now Christian McBride, the finest bassist of his generation, is on track.”