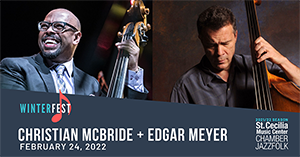 Edgar Meyer
In demand as both a performer and a composer, Edgar Meyer has formed a role in the music world unlike any other. Hailed by The New Yorker as “…the most remarkable virtuoso in the relatively un-chronicled history of his instrument”, Mr. Meyer’s unparalleled technique and musicianship in combination with his gift for composition have brought him to the fore, where he is appreciated by a vast, varied audience. His uniqueness in the field was recognized by a MacArthur Award in 2002.